(Historical information provided in part by iSayeret ... thanks to T. White)

Sayeret Golani was created in 1951. It was originally named Machleket Siyur Meyuchedet, or Special Reconnaissance Platoon; a part of the 1st Golani Infantry Brigade. Since its creation, the members of the Golani's brigade reconnaissance element have proven themselves to be a effective force with many capabilities beyond the simple reconnaissance role. They have operated all over Israel and even beyond; in Beruit, Lebanon, Syria, and even Uganda in the rescue operation at Entebbe.

Sayeret Golani has had a bloody but illustrious history. The unit assaulted and took Mt. Hermon's strategically located peak in a fierce battle during the 1967 Six Day War. In the beginning of the 1973 Yom Kippur War, the elite Syrian 82nd Paratroop Regiment seized the mountain top from the small contingent of Israeli defenders. Sayeret Golani was tasked to retake the strategic location.

At 2000 hours on October 21, 1973. Sayeret Golani members began scaling the steep cliffs at the base of Mt. Hermon. Six hours later, at 0200 hours the next day, they reached the top and the fighting began. By 0730 hours a firebase had been secured near the cable car to the top of the mountain. By this time the Golani fighters were using RPGs and rifle fired grenades liberated from dead Syrian defenders to augment their attack, causing many of the defending Syrians to flee or surrender. At 1100 hours, the Israeli and Golani brigade flags were raised to the top of the base's listening post antennae. The nine hour battle had killed 55 Golani members and wounded 79 others. Seren (Captain) Vinnik, who was posthumously advanced to the rank of Rav-Seren, (Major) leader of the Sayeret, was also killed. Even though mortally wounded in the beginning stages of the battle, he had continued to direct his commandos until he had finally been carried down the mountain in a stretcher.

Sayeret Golani uses a grueling selection process that can end at any time - dropouts from this selection are sent to the regular Brigade units to serve out the remainder of their service commitments. Upon completion of the Gibush (selection phase), potential commandos are trained in a vast array of necessary skills. The complete training lasts about a year and 8 months, although trainees are considered "combat-ready resources" after 6 months.

The curriculum includes a broad array of new techniques to learn and master. Skills such as parachuting, demolitions, escape and evasion, survival, and intelligence work are covered. The soldiers of Sayeret Golani are expected to be proficient with all of the weapons used in their area of operation, including many exotic weapons found nowhere else in the IDF, and the unit has become one of Israel's primary forces in the war against terrorism, both within Israeli territory and over the borders. All unit soldiers are trained as proficient marksmen and most pass sniper qualification as well. Due to the nature of their operations, they also have their own urban warfare training center, known as "Gehenom". (hell town) Although officially tied to the Golani Brigade of the Northern Command, the Sayeret operates wherever and whenever required often coordinating training and actions with other specialized units (Sayarot) of the IDF. The unit has also coordinated with other national specialized units, such as the British SAS, the US Navy SEALs, the French Gendarme Nationale and the American Delta Group.

Members who pass all the tests and training are rewarded with the badge of the Sayeret, a small metal pin with a flying tiger as the emblem. The emblem dates back to the beginning of the Sayeret and this is where they get their unofficial name, Ha'Namer Ha'Me'ofef. (the Flying Tiger) 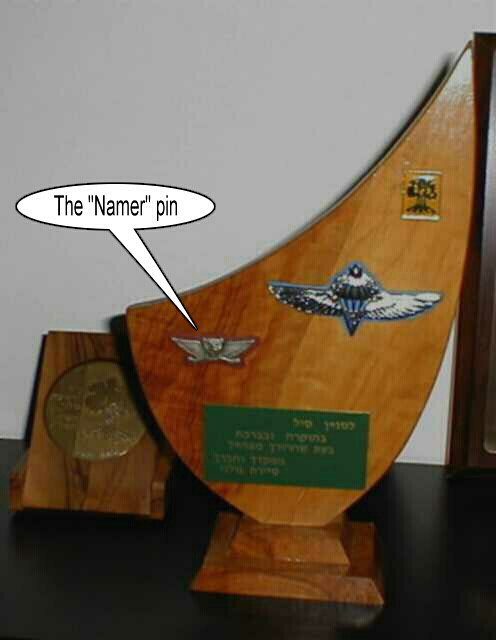